The American V-8 Supercar Series sponsored by Nitto tires invaded the Autobahn Country Club in Joliet ,IL. this past weekend (May 21,22) with 23 race cars primed and ready to run.

This would be the first actual race at the new and beautiful road course just 40 miles southwest of Chicago. This event was run in conjunction with an SVTOA event organized by Mark Wilson. In addition to the two regular classes, AV8 and Unlimited, this weekend would see the formation of the first ever “R” Model challenge. This race within a race would be open to all registered “R” Model Mustangs from 1965 thru 2000. While the first ever race of it’s type, it is hoped that this will be at least a once a year event run in conjunction with AV8SS at various venues around the country.

The weekend format would be the same as in the past, two 30 minute sprint races punctuated by a 20-30 minute “pit stop” followed by another 30 minute race.

While normally the focus would be on the regular AV8 class, this weekend looked to be shaping up as a showdown between the fastest of the East against the fastest of the Midwest. Undefeated Lester Lesneski in his Performance Automotive and Griggs Racing sponsored 2004 Mustang would finally have some competition from perennially fast guy Jeremy Behrendt in his Performance Plus,  Highland USA sponsored 1999 Mustang. The other heavy hitter that would play a huge factor would be Midwest terror Chris Griswold in his GV Machine sponsored 1986 Mustang.

The regular AV8 class would have an interesting twist as Nashville winner Pete Johns would be seriously tested by Mike Schlickenmeyer driving his brothers 1993 Mustang sponsored by Griggs Racing, Performance Automotive, Cobalt brakes and Bath County Collision. One of the Cobra R’s would also be a factor in the AV8 class, that of Fred Fetzer in his beautiful 2000 R model.

Qualifying on Saturday certainly lived up to the hype. In unlimited, Griswold, Lesneski and Behrendt, would swap positions throughout the session with each one bettering the other. In the end , Lesneski put in a flyer at the end of the session to capture the pole on the South course with a blistering 1:34.5. He would be followed by less than a half second by Griswold with Behrendt close behind. David Morrison, Mike Kryder and Buddy Cisar would round out the field in unlimited.

The regular AV8 class, the much larger of the two classes, would show a bit of a surprise with Johns and Schlickenmeyer trading fast laps. In the end, Schlickenmeyer would prove the quicker with a lap nearly 1.5 seconds clear of the rest of the field. No doubt we were in for a tremendous battle in both classes. The rest of the AV8 order would be Fetzer, Brian Groth, Greg Anderson, John Vickerman, Gene Boccabella, Brian Tone, Barry Kline, Jeff Henderson and Brion Gluck. 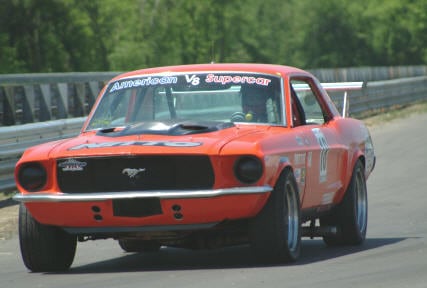 The Cobra “R” field would be comprised of 6 cars, led by Fetzer. The field was rounded out by Mark Wilson’s ’93 and new comers Bruce Cameron, Joe Johnson, Andy Menard, and Lou Groth. Kudos to these gentleman for not being afraid to use these cars the way they were intended to be used, on the track, not in climate controlled garage somewhere.

When Sunday dawned, it looked like things might become even more interesting as rain was in the forecast. As the morning progressed, the skies cleared for a sunny race starting at 12:50. Due to various mechanical ills, 20 of the 23 cars would make the call to grid. At the drop of the green for the first race all expectations would be realized. Lesneski would get a nice start but outside pole sitter Griswold would not be so fortunate as Behrendt would get tremendous jump to chase Lesneski in the early laps. In AV8, pole sitter Schlickenmeyer was able to fend off Johns and Fetzer in the early laps. As 20 cars roared around the 2.63 mile circuit, individual battles were brewing through the field. None of the fights were better than that at the front of the field. Lesneski and Behrendt had pulled away from the rest of the field at were putting on a tremendous show. There are few things more exciting tan 2 700 horsepower cars swapping positions every lap. Both cars were consistently running under their pole qualifying times. The excitement oat the front was short lived however as just as it looked as if Behrendt was taking control of the race, Lesneski suffered a driveshaft failure, ending his run. In AV8, the battle was just as tight with Schlickenmeyer setting the pace until the 10th circuit when Johns made a spectacular pass at the end of the long back straight to take the lead and the win by mere 1.1 second at the finish. Positions 5 through twelve were hotly contested with all of cars swapping positions throughout the race and being separate by less than 4 seconds at the checkered flag. In the end, the finishing order would be as follows: Behrendt, Griswold, Johns, Schlickenmeyer, Morrison, Fetzer, Tone, Kline, Anderson, Groth, Krider, Vickerman, Cameron, Cisar, Johnson, Menard, Henderson, Lesneski and Gluck.

The 25 minute intermission provided both racers and spectators the opportunity to catch their breath. Crews were able to refuel the cars and do any minor maintenance required in the hot pit area. Unfortunately, Lesneski would be unable to fix his car for the second race.

The start of the second race was just as exciting as the first with Griswold and Behrendt fighting for position until Behrendt eventually started to pull away, turning the fastest laps of the weekend, circulating in the low 1:32’s! Griswold was able to give chase until suffering a mechanical problem of his own and eventually dropping out. In AV8, the battle was much the same as in the first race with Johns and Schlickenmeyer going at it until Schlickenmeyer lost 4th gear late in the race, relegating him to 2nd in AV8 and Johns going on for the double. The amazing thing about the race is that from the 2nd place finisher to the 14th place finisher the best lap times were all within 1.7 seconds of each other. This made for some tremendous racing throughout the field, the closest of the year in fact! One of the more interesting races was between the two R models of Fetzer and Tone with Tone turning in the fastest lap of the weekend for all R models but Fetzer nipping him at the finish to win the R model challenge by a scant .481 seconds. This also serves to prove that the AV8SS formula is working and is a viable concept for the future.

The job of proclaiming overall placing’s is one of combining each racers highest finishes, assigning them a point value and those with the lowest point total being the highest finishers.

When the math was done, the weekends results would look like this: 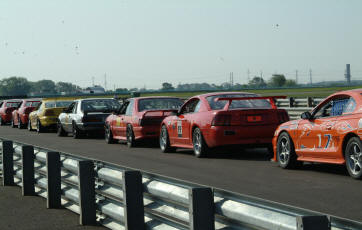 Congratulations to all! The total prize money and awards given out at the awards ceremony was in excess of $4500.00, not including thousands in contingency monies from various aftermarket manufacturers and suppliers partnering with AV8SS!

In keeping with past events, AV8SS continued it’s association with our veterans groups by raising over $100.00 with the sale of “Wounded Warrior” coffee products. We are proud of our association with these groups and hope more motorsports entities find a way to partner with them as it is a good fit and a worthwhile cause.

The next event in this exciting series will be at the Beaver Run complex just outside Pittsburgh, Pa. on August 6th and 7th.