Looking for B&A Ford?? I received an email from a guy not too long ago with a whole bunch of old articles and information on the swap along with some B&A brochures and price sheets. I gave the phone numbers on them a call and spoke to a nice guy that, as far as I can tell, is what used to be B&A Ford Performance. He is still casting the parts, but does not deal directly to the public. He gave me the number for Bush Performance (located in Michigan), the main guys that he works with. You can give them a call at 501-646-9108 and he suggested speaking with Guy or Bill. They should be able to get any of the swap parts listed below. I may give them a call sometime soon here and see about getting a list of prices/part numbers etc and putting it online. Good luck!!

So.. You’ve decided to build the ultimate smallblock :).. Follow me along and I’ll give u all the details. Most of the pics here were scanned in from other places, I don’t personally know where, but they have been useful to me anyway.. Take a look!

Well. Why would u want to do this? 351 Clevelands rule. What makes them rule? Their heads. When Ford designed the 351c heads back in ’68-’69, they took a look at everything else out there and squished all the best ideas from everything into one neat package. Huge ports, big canted valves.. The first appearance of these was on a machine known as the Boss 302. This was basically a hipo 302 block with 351c heads on it. The 351c itself, however, did not appear until 1970. Unfortunately, the 351c block isn’t quite up to par with everyone. A poorly designed oiling system combined with the thinwall casting leave some to be desired. Not to say that the Cleveland’s block is going to bring the average person problems (I have personally had a Cleveland with over 300,000 miles on it in perfect running order), but if you are building a real performance machine, this is the alternative. As for 351 Windsors – Their heads are nothing special really, simply a slightly larger version of your generic 289/302 heads. Smaller ports and valves don’t flow anywhere near the way Clevelands do. The blocks, however, are well-designed, have a decent oiling system and are far less prone to cracking. Not only are they stronger, but they are cheap and easy to find. Here’s some specs to compare the two blocks:

There’s 4 basic areas that need to be modified to accomplish this swap.. I’ll go thru each one:

You’ll be needing a special intake manifold. Luckily, there is a company that casts them now. Two versions are available; a dual plenum and a single plenum. For info on these, contact Guy or Bill at Bush Performance (501-646-9108). You’ll also be needing special-length pushrods which they also carry. Notice the water outlet on the manifolds.

Special pistons are also needed for correct compression and valve clearances. There are two types; flattops and popups, depending on the compression that you want to get. They are available from KB Performance Pistons, reachable at 800-648-7970. They enable you to use the stock Windsor rod and work with either 2v or 4v heads.

A couple of modifications need to be performed to the heads themselves for coolant passages. 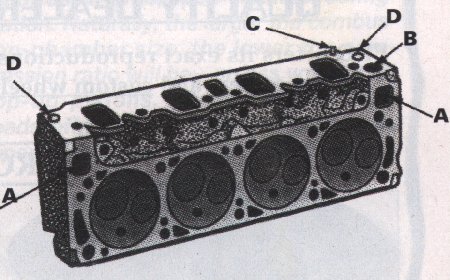 [A] Coolant passages need to be plugged.
[B] 0.80 inch hole must be drilled on each head. Use the SVO intake as a template for these holes.
[C] Remove these alignment pegs.
[D] Use freeze plugs to block these end holes, if the heads have them.

Head gaskets designed specifically for swapping Cleveland heads onto the Windsor block are available from Ford’s SVO department at 313-337-1536. There are 3 holes that you must drill in the Windsor block, however, to match up with the Cleveland water passages. Use the head gasket as a template to mark these holes (3 on each side), then remove the gasket and carefully drill them out.

That’s about all that you will need to do this head swap. It’s fairly straight-forward and doesn’t require machine work besides drilling a few holes. You’ll soon be making tons of power with your very own 351 Cle