Carolina Motorsports Park was the site of the season opener for the newly formed American V-8 Supercar Series (AV8SS). Hosted by the SVT Cobra Mustang club (SCMC), the weekend was an unqualified success by any measure.

Saturday dawned windy but sunny with 17 racers ready to shake off the long winter chill. The morning practice session found veteran Barry Kline atop the time sheets in AV8 at 1:50.876, followed by Bryan Shugg, Thomas Moran from

Canada, Greg Anderson, Richard Koehler, rookie Brian Groth, Mike Schlickenmeyer, Gene Boccabella, Brion Gluck, rookie Jack Flynn and John Vickerman. The unlimited class had an obvious potential winner in Lester Lesneski in his supercharged 2004 Mustang. Lesneski led the time sheets all weekend, dipping into the 1:43’s when required. Giving chase in unlimited were Pete Johns, David Morrison, Bobby Byrd and Gary Henkel.  In an interesting twist, a qualifying race was held on Saturday to set the grid for Sunday’s “money race”. Though mired mid-pack due to a poor “draw”, Lesneski wasted little time moving to the front of what was a 15 car field. The real action was a bit further back in the AV8 class where Kline (’94 Mustang Cobra) was waging a fierce battle with local hot shoe Shugg (’98 Mustang Cobra). Slightly further back , rookie Thomas Moran dueled with Richard Koehler and Greg Anderson with a third distinct battle between Groth and Schlickenmmeyer. In the end, Kline would have the measure of Shugg followed by Moran, Anderson, Schlickenmeyer, Boccabella, Koehler, Flynn and Gluck. In unlimited, Lesneski would earn the top starting spot for Sunday over Morrison, Henkel, Byrd and Johns.

Sunday dawned even brighter with a welcome relief from the high winds of the previous day.

Due to early season teething problems and mechanical woes, only 14 of the 17 cars were able to answer the call to the grid. At the drop of the green, Lesneski rocketed off never to be headed. As with Saturday, the most excitement was in the AV8 class. Again, it would be Kline and Shugg embroiled in a race long battle for the win with Groth, Schlickenmeyer and Anderson having a war of their own. The race presented problems for both cars and racers in knocking the rust off for the coming season. Mechanical gremlins surfaced during the race and drivers overcooked braking points to lead to some fairly high attrition. In the end, Kline would come out victorious with Shugg close behind, followed by Groth, Schlickenmeyer, Anderson, Flynn, Koehler, Gluck and Boccabella. In unlimited, Lesneski won in a rout,  followed by Morrison, Henkel and Johns. The race definitely did not lack for close competition, providing a little of everything for the spectators in attendance. Post race inspection showed no bent sheetmetal and no flared tempers. A good time was had by all. Congratulations to all competitors! 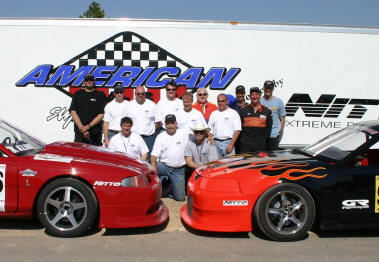 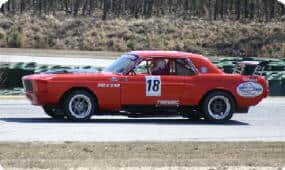 nutandboltkit.com provided a free entry for the next event in the way of a Sportsmanship award, presented to Pete Johns. Post race cash and prizes totaled in excess of $3500.00, not including individual contingency awards.

AV8SS would like to extend a special thank you to SCMC for their expertly run event and superb hospitality during the weekend. A special thanks to John Pearson, event coordinator.