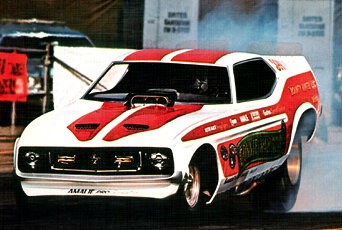 One of Ford’s mainstays from the mid-60s to the early 70s was Michigan’s Connie Kalitta. It was Kalitta who introduced the SOHC and Boss 429 motors to fuel racing with his T/F entries, but by his pictured 72 ride, the “Bounty Hunter” had made the switch to Hemi power. Among Kalitta’s other accomplishments were his tutelage of Shirley Muldowney into the F/C and T/F ranks and giving a young Tripp Shumake his first driving assignment…  in a Bounty Hunter Mustang when Kalitta was unable to show for a match race obligation. Following the above flopper, Kalitta went back to his T/F roots in the mid-70s, but remerged in the flopper ranks in the mid-80s with a Mustang driven by son Scott and sponsored by his own Kalitta Flying Service. One of the Pilots for Connies Fling service is your Own Brion Gluck of Dark Horse Racing 1991 to 1994. Brion Flew Beech TurboLiners and Lear jets at KFS.

Pictured “way out west” at Irwindale is the Colorado based “Hells Cargo” Mustang of Ernie Spickler and Tom Cacy. Car was ex-Jerry Ruth Pay-n-Pak Mustang that the team ran from the early 70s through 76. Drivers included ex-Jeg’s shoe Bob Durban and Mike Snively. In 76, Spickler’s brother Doug Jordan purchased the car and continued to campaign the flopper through 78 with such drivers as Doug himself, Jere Wilson and Rob Williams. In 78 Jordan built a new Trans-Am F/C and had the first Jolly Rancher sponsorship…  Hell’s Cargo cars were “High Country” regulars, ran division meets and match races throughout the Rocky Mountain region. Today, Jordan is negotiating to buy ex-Ed Mullins R/E Duster flopper and go nostalgia funny car racing. (Photo by John Shanks, info courtesy of Doug Jordan) 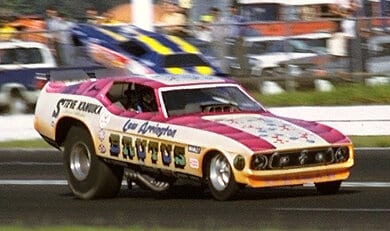 One of funny cars “founding fathers,” Lew Arrington moved to PA in the late 60s with his Firebird flopper to set up shop with his popular series of “Brutus” funny cars. Firebird shell gave way to Mustang body in 71… neat trick on first Mustang was fitting 392 powerplant with Boss 429 valve covers to round out the Ford look. Pictured is Arrington’s 72 Mustang at Englishtown, NJ… design on hood/roof represented nitro molecules. Car started the season a brilliant orange but due to a paint problem faded as the season continued…  later burned to the ground at Epping NH. Arrington’s last nitro ride was at the wheel of the Brutus Charger (ex-Nichols & Oxner) that ran out the Fred Forkner’s Delaware stables. Arrington later sold the “Brutus” name to Roy Harris who carried it into the 80s. Arrington became one of the charter Rocket F/C pilots with his swoopy “Capt America” Mustang in the mid-’70s and was joined in the RF/C ranks by former F/C drivers Fred Goeske and Sam Miller. (JW Last Photo)

The Doheny and Fullerton Trojan Horse was one of the prettiest…  and quickest F/Cs of 1972. Shown here at the 72 NHRA Summernationals, the car recorded a then-quickest 6.42/228 in the first round of eliminations. Fullerton became NHRA World Champion the same year by winning the World Finals at Amarillo. Fullerton started the decade wheeling the Galpin Ford SOHC powered Maverick, adopted the Trojan Horse name with a 71 Mustang. He continued to campaign the Trojan Horse line throughout the 70s, closed the decade with a “new generation” Mustang shell in 79. Rare Fullerton “Horses” include a short lived rear engined “Stang” in early 73, a Trojan Horse 2 campaigned by Dale Pulde in the early 70s and Fullerton wheeling M/Ts seldom seen “yellow” car as a stablemate to the “blue” and “red” cars as a Boss 429 test bed to the others SOHC powerplants in 69. (JW Last Photo)