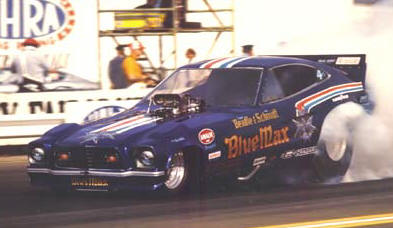 A long way from his roots in Lubbock, Texas was Raymond Beadle and the Blue Max Mustang pictured at Santa Pod Raceway in England in the mid/late 70s. Beadle opened the 70s driving T/F cars in TX, then shoed one of Don Schumacher’s Cudas in 73/74. Beadle teamed up with Blue Max “founder” Harry Schmidt (who had parked the Max in 74 for financial reasons) in 75. The team stayed together through 76 when Beadle bought Schmidt out and took full control of the Blue Max operation. Max won Indy in 75, the IHRA World Championship in 75, 76 and broke Prudhomme’s stranglehold on NHRA competition by winning the NHRA title in 79. In 78 a yellow and blue Arrow body replaced the Mustang II body; Mopar shell took the Max name into the 80s. (Photo by Nick) 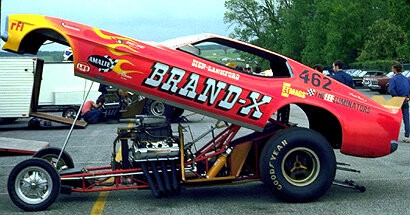 The Ramchargers powered Sien & Lankford Brand X Mustang was from San Antonio, Texas…  was preceded by a Hardy built Camaro effort that later went on to become the “Mexican Revolution” of Johnny Valdez. Journalist Jon Asher drove the pictured car for a 1972 series in Super Stock & Drag Illustrated magazine about licensing in a funny car. Following a couple shakedown passes, Asher managed a best of 8.09/183 at OCIR, then followed up at Gainesville with a best of 7.47/192… and a fire in the lights. At the end of 1973, rumored McDonalds sponsorship failed to materialize and the team retired. Cecil Lankford made a brief return in 75 with Brand X, confined activities to Texas. (JW Last Photo)

Transplants from the 60s Gasser wars and an original member of the F/C “Coke Cavalcade of Stars” circuit, the Stone, Woods & Cooke Swindler IV Mustang is pictured at OCIR in 73. By this early 70s effort all that remained of the original SW&C team was Tim Woods as Fred Stone had retired and Doug Cook had moved on to wrench for Big John Mazmanian’s F/C. Kenny Safford shoed early SW&C efforts on the Coke circuit in late 60s, Dee Keaton did a short stint after. Pictured car was preceded by the popular “Tinkerbell” SW&C Pinto in 71 initially driven by “Mighty Mike” Van Sant, but later handled by Gary Scow. Van Sant returned to shoe the SW&C Swindler III Mustang entry which was destroyed in 72, then took over the reins of this car which was debuted at Lions Last Drag Race. Car later became Van Sant’s first “Invader” Mustang. (Photo courtesy of Jim White) 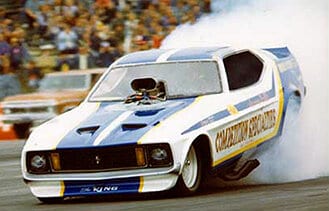 From out of the great Northwest came Jerry “The King” Ruth. Ruth dominated the ’70s nitro scene in the NW, winning numerous Division 6 T/F and F/C crowns, often both in the same year! In fact in 1971, Ruth won 9 of the 10 nitro titles available in Div 6 WCS competition, only losing the T/F final at the final event of the season. Ruth’s first funny car was the ex-Art Whipple Camaro in 1970, three Mustangs and a Mustang II followed. Ruth’s T/F cars concentrated on National Event competition while the F/C was used mostly for the guaranteed money found match racing. Hired guns in the 70s for Ruth included Frank Hall and current T/F wrench Lee Beard. Ruth campaigned this car through the mid-70s, then it went on to be raced by low-buck So Cal racer Rodney Flournoy 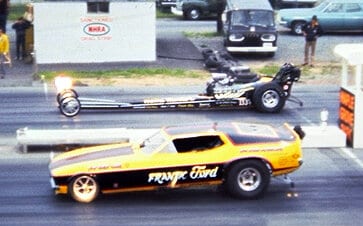 Sarge Arciero lines up against the Hemi Hunter T/F entry at Maple Grove in the short lived early 71 version of the K & G Speed Associates Frantic Ford. Car burned to the ground while the paint was still wet, was replaced by ex-Blue Max Mustang with Roy Harris driving. Frantic Ford was descended from the Frantic Four T/F entry of the 60s, team made the switch to floppers in 69 with a Ron Rivero driven Mach 1. In the mid-70s, East Coast T/F shoe Dodger Glenn took over the reins of a Mustang II based Frantic Ford. Cars where always Mustang bodied, always carried the sanitary yellow and black paint scheme. Although the car never won a national event, it was a popular, strong east coast performer. (JW Last Photo)