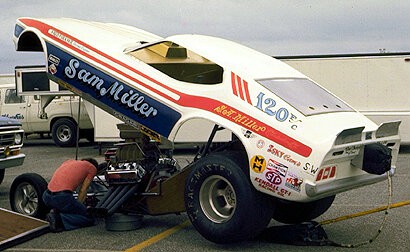 New Jersey’s “Slammin Sammy” Miller’s Buttera built 72 Mustang. Car was preceded by an identically painted Duster that carried Miller to his only NHRA National event victory at the inaugural (71) Grandnationals in Canada. Pictured car caught fire at the 72 NHRA Nationals and left Miller with serious burns. In 74 Miller returned with a Mustang II bodied F/C but following a pass in the Pollution Packer rocket, he sold the flopper and went to work building his own rocket F/C. According to SS&DI, Feb 76, Miller envisioned rocket floppers as a way for “…  professional funny car racers…  to ply their trade in a safer manner, much less expensively…  There’s no breakage, no fire, no explosions.” Although the R/FC craze didn’t catch on save for a handful of nitro converts, Miller continued to run rocket powered cars through the remainder of the 70s, perhaps the best known being his “Vanishing Point” entries. (JW Last photo) 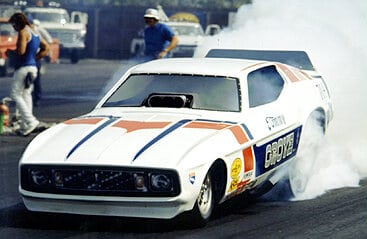 “Mr. Ford” Tommy Grove’s last Mustang bodied flopper circa 1973. From the mid-60s through this car, Grove exclusively ran Mustang F/Cs, all but this one Ford SOHC powered. Grove jumped into the Barry Setzer Vega in late 74, continued to campaign the pictured car simultaneously for a short period into 75 before concentrating on the Setzer car full time through approx 77. Although an NHRA national event victory eluded him, Grove did win several AHRA races with the Fords. In fact Grove won the first flopper show of the 70s at the 70 AHRA Winternationals. In a strange irony, Grove won Beeline Dragway’s “Mr Chevrolet” title in 75 with the Setzer car. (Photo by John Shanks, used with permission) 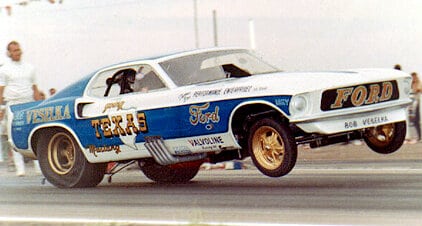 From Texas, circa 1970 comes Bob Veselka and the “Going Texas” Mustang. Car was ex-Dick Loehr “Stampede” car from the 69 season; car was purchased when Loehr gave up nitro floppers, eventually to go Pro Stock racing. Bob reports “…  car came with all the contracts and sponsorship from Ford. We went straight to Orange County and started there. That was an experience – my first time with a Cammer…  it was a really great engine, however it required a lot more education on its mechanics and operation then I had at the time and to just jump in was not smart looking back” Bob’s previous funny car experience had been “…  with a Mercury Cougar in 1967. I had a 392 blown Chrysler. in it and built the chassis myself. We started local area racing…  for us local was within 400 miles. With the Mustang Bob reports “…  I was just getting the Cammer to run when Ford pulled the plug — no more sponsorships. We got the news at Bristol AHRA Springnationals where we had just set low F/C et for the meet. I loaded it up and turned my disappointment into doing something else and retired from drag racing.” (Info and photo courtesy of Bob Veselka)