CHARLOTTE, N.C — Even without a working clutch, Team
Dark Horse Racing’s Brion Gluck (pilot for ITC Holding here in LaGrange) had enough horsepower and handling to pull out a fourth place in the AIX (American Iron Extreme)
class of the American Iron East race at Lowes Motor  Speedway here Friday, July 19.
The 1971 Mach I Mustang lost its clutch on the parade lap due to a bad throwout bearing, forcing Gluck to match revs on upshifts and downshifts to change gears
as the cars raced under the lights in a rare evening race.
Fortunately, Team Dark Horse also had a new engine from Panhandle Performance in Panama City, Florida. The new power plant from the shop of expert
engine builder Mark Biddle produced 475 rear-wheel horsepower in dyno tests and was installed in the car for the first time just four days before the race. 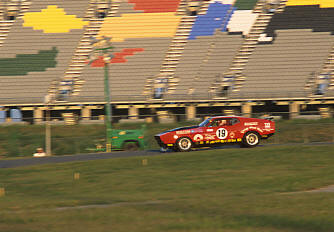 The first practice session was cancelled after a stock car dropped oil on the track, forcing the drivers to sit in their cars in the summer heat for almost half an hour. When the second practice session began just 20 minutes later, it ended after just two laps when Richard Koehler hit a tire barrier and rolled his car.
Without any practice time, Gluck chose to take it easy during the qualifying run, and was gridded 16thout of the 19 cars.

Although the clutch was gone after the parade lap, the Team Dark Horse Mach I passed three competitors on the first lap, reaching speeds over 170 on the high bank and quickly moving through the pack.
Gluck credited the Canfield heads and Comp Cams camshafts for the strong top-end power in the new engine. In addition, the suspension upgrades from Total Control Products “hooked up unbelievably” well on the high-banked tri-oval part of the course, he
said. “We were running the high groove like there was no tomorrow.”

Without a clutch, Gluck was forced to brake earlier than usual on the entrance to Turn 1, the beginning of the infield road course, where he had to carefully downshift from fifth to third while braking from top speed down to 80 and making a sharp 90-degree turn.
Rather than trying to make a multitude of quick shifts in the infield, Gluck simply left the car in third gear. “We had so much torque (from the new engine), we were able to get away with it.”
The Team Dark Horse car fought an epic battle with eventual AI class winner Bryan Shugg in a 1998 Mustang Cobra. Gluck managed to fend off the Cobra for most of
race, until on the next to last lap he pranged the clutchless downshift into Turn 1 and Shugg squeezed his way in front.
American Iron East director Dan Schlickenmeyer won the AIX class and was first overall in his 1993 Mustang, while Brian Tone in another 1993 Mustang
finished second in class and overall.
David Smith celebrated his 50th birthday and kept the top spots from being a complete sweep for Ford by taking third in AIX in his 1975 Camaro.

Dark Horse acing would like to thank our local sponsors Westbrook tire, Mud Creek graphics, LaGrange PPG paints and Amerlube without them we would not have a racing season.