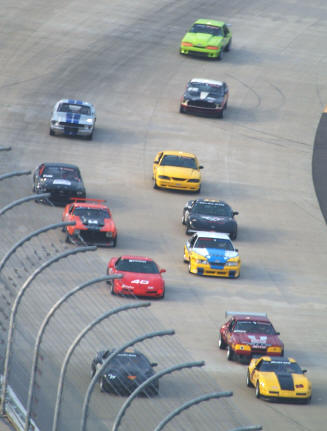 The AV8SS held its qualifying Friday evening with much anticipation and a few interesting twists. With the reintroduction of the unlimited series, two distinct groups would break out. In Unlimited it would be the Corvettes setting the pace with the Mustang of Gary Henkel giving chase. The regular AV8SS class showed Mike Schlickenmeyer, driving his brothers 1993 Mustang, atop the qualifying sheets. Mike was in his brothers car due to the fact that Dan Schlickenmeyer wound up atop the time sheets in unlimited driving one of Ed McClains 3 Corvettes he brought to the event. Qualifying turned out to be a true family affair. Ed McClain would claim outside pole, followed by Henkel and Jerry Onks in his beautiful T1 Corvette. In AV8, outside pole would go Brion Gluck in his 1971 Mustang, followed by Auston Mcclain, Barry Kline, Chuck Newman, Joe Agent, Nelson Grossnickle, Erik Henkel, Jack Flynn and Shawn Jewett rounding out the 14 car field.

Running the usual dual race format, the AV8SS group took the track for the first race under the lights at Nashville. At the drop of the green, Dan Schlickenmeyer in the 1996 Corvette led the field off the banking and into turn one. Gary Henkel got a great start from his 3rd starting position to claim the second spot followed by Onks and Ed McClain. In the AV8 class, Mike Schlickenmeyer made a strong start to lead that field. Dan stayed in front until lap 3 when a power steering line failed, resulting in a black flag and the end of his race. That would leave Henkel and Onks to battle it out for the win in Unlimited with Onks prevailing after a 26 lap battle that saw Henkel running low on fuel and being passed by Mike Schlickenmeyer on the last lap to claim 2nd overall and the AV8 win. He was followed by G. Henkel, Gluck , Newman, E.Henkel, Agent, , A. McClain, Jewett, Kline, and E. McClain.

With the attrition from race one, race two would start out a bit differently but with similar 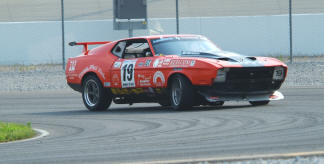 results. Ed McClain would be on pole in unlimited but at the drop of the green it was all G.Henkel. McClain would suffer transmission woes,

leaving Henkel and Onks to battle at the front. In the AV8 class, Mike Schlickenmeyer was in a class of his own as he ran off from the rest of the AV8 field. He led into turn one and was never headed, going two for two for the evening of racing. In unlimited, Henkel held a 2 second lead throughout the race until making a rare mistake with 4 laps remaining allowing Onks to slip by for the win. This earned Onks a two for two evening also. 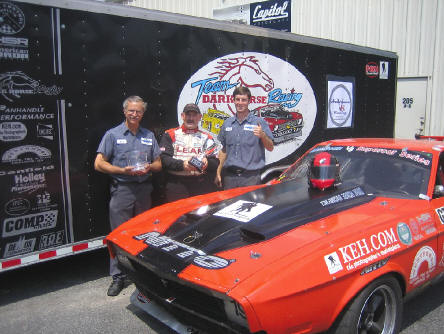 Between the AV8 race and the other three series races, the spectators in attendance certainly received their monies worth. It was truly an exciting weekend of road racing in what is turning out to be a true hotbed of racing activity. All indications are that the event will continue to grow and planning is already underway for next years event under the lights.