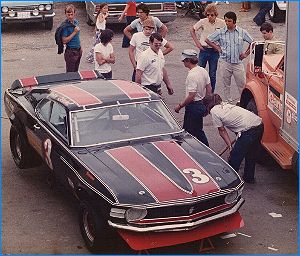 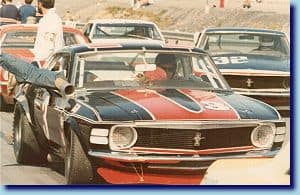 On the left side you see more pictures of 9F02R112073 from the 1972 season with Driver Gimbel, but we would like to give you some more info on the other T/A Factory Racers in the following listing:
Note: This list is pieced together and is based on info from: Wolfgang Kohrn, Steve Francis of Main Street Motorsport-Historic Racing Services, Scott Couchman, Ed Ludtke, Peter Marcovicci, Sam Colman, David M. Bauer and Randy Gillis from JE Pistons
Factory Racing Boss 302 Cars (A total of 15 plus 1 shell)
The first two cars delivered to Kar Kraft were: 9F02R112073(Carroll Shelby) & 9F02R112074 (Bud Moore). These were different from the rest of the cars as they started life as “R” code CobraJet cars rather than the “M” code 351W-4V cars used later.

Our current history logbook on the other T/A Mustangs
(still subject to final corrections):

9F02R112074 – (main Team Bud Moore car in 1969). Driven by George Follmer and wrecked in the St. Jovite race. Currently owned by Don Hodges and is under restoration. It is just about done. It will be shown at Knotts Berry Farm Mustang event in April 2002 or SAAC meeting this year in July.

Bud Moore cars:
9F02M148623 – Wrecked at Riverside by George Follmer in 1969 when a wheel broke going into the pits. Restored in 1992. This is one of the few that still has the original Twin-1050 cfm Holley Dominator carbs with the original “IR” (individual runner) experimental high rise intake manifold, with the offset distributor (although it was not installed on the car). The car is presently fitted with an original Bud Moore Mini-Plenum and Holley dual feed 4V as of early 2002. The car has been restored to exact 1969 Riverside specifications.

9F02M148625 – George Follmer back up car (Bud Moore Team confirmed) This missing 1969 team Bud Moore car will likely never turn up. Steve Francis of Main Street Motorsport-Historic Racing Services, specializing in the Trans-Am period of 1966-72 (and importer of Minilite Wheels), hunted it down while he lived in England and it’s an interesting and sad story.

9F02M148626 – Smokey Yunick car – Never completed a race and totally restored to concours trailered condition. Part of 2nd group of cars delivered to Kar Kraft. Steve Francis reports: “The Yunick Boss was restored around 1990 by Brooke Mossgrove with a little help from Rich Rodeck on specific suspension parts. I helped to source parts. The car really is as sweet as the pictures you’ve seen in the magazines.” The car even has the correct twin Holley Dominator carbs and offset distributor.

Shelby cars: 9F02M148627 – Driven by Horst Kwech at Michigan International Speedway and wrecked when his car went into a spectator’s car, killing the owner. It was stored at Holman & Moody, (current status unknown).

9F02M148628 – It was raced by Sam Posey and Peter Revson in 1969 and a 1970 season. Dan Gurney also drove this Shelby Team car at Laguna Seca and Seattle in 1969. It was a Bud Moore backup car, wrecked in testing at St. Jovite and sold to Troy Promotions for 71 season. It was raced by Tony Delorenzo in 1971 as number 3 under Troy Promotions sponsorship. It was restored.