Mustangs have had over 35 years of history in racing, spanning every generation of the car and including such stellar examples as the Shelby GT350 and GT500, and the winning Trans Am series cars of the 1960s

Thanks to vintage and historical events, much of this great history can still be seen at tracks around the country. Many organizations host vintage races including the SCCA (Sports Car Club of America), VARA (Vintage Automobile Racing Association), and HSR (Historic Sports Car Racing, Ltd), and some consider them the fastest-growing segment of motorsports in the world.

Vintage racing isnt just a high-speed parade lap for spectators to see restored cars. Its real racing, wheel-to-wheel,pass-em-where-you-can running with the occasional trading of paint or excursions off track just like in any other form of racing. The fact that some of the cars are considered nearly priceless pieces of automotive history is secondary for most drivers when a trophy is at stake

2 wide on the high side for the pass 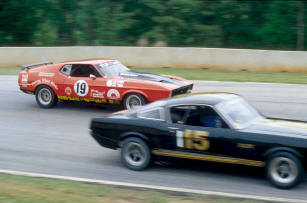 Dark Horse Goes Around the outside of turn 2 at the Walter Mitty 02  (RMimage@bellsouth.net)

And a trophy is about all a winner of a vintage race can expect; most events pay no prize money, although some do award points within a race series.

Almost anything that has been raced in the past qualifies for a vintage class of some kind, from wild turbocharged Formula 1 cars down to lowly stock sedans. Cars are usually grouped by weight, horsepower and a series type, for example GT or Trans Am, then by age. Some classes, like the HSR B.O.S.S. (Big Open Single Seater) pit cars from very different series and eras against each other, for example Formula 1 against Indy cars.

Most sanctioning bodies require that an entrant be retired from non-vintage competition for at least five years. Of course the cars must be safe and in most cases, adhere to a set of rules for the class it competes in, just like any other racing series.

Vintage events attract hundreds of entrants and tens of thousands of spectators, and the series have attracted major sponsorship from the likes of Rolex, WorldCom, Chrysler and others.

A typical race weekend for HSR will include an 8-12 lap sprint race on Saturdays and a 1-3 hour endurance race on Sundays, and in between spectators are able to walk through the paddocks looking at the historic cars and seeing the drivers, many of whom are racing legends like Hurley Haywood or John Paul, Jr.

How good is the racing on the vintage circuit? Older race cars typically dont do anything as well as a new one does, whether it be braking, shifting, steering or accelerating, forcing drivers to be smoother and more skilled if they want to be fast. Those skills can make drivers deadly competitors when they get in a more modern car.

In July, veteran vintage racer John Finger proved the point, hopping into an ARCA Ford and winning the ARCA 150 at Watkins Glen in his first race in the series. Will vintage racing become a popular place for younger drivers to develop their skills? If Fingers experience is any guide, maybe it should be.