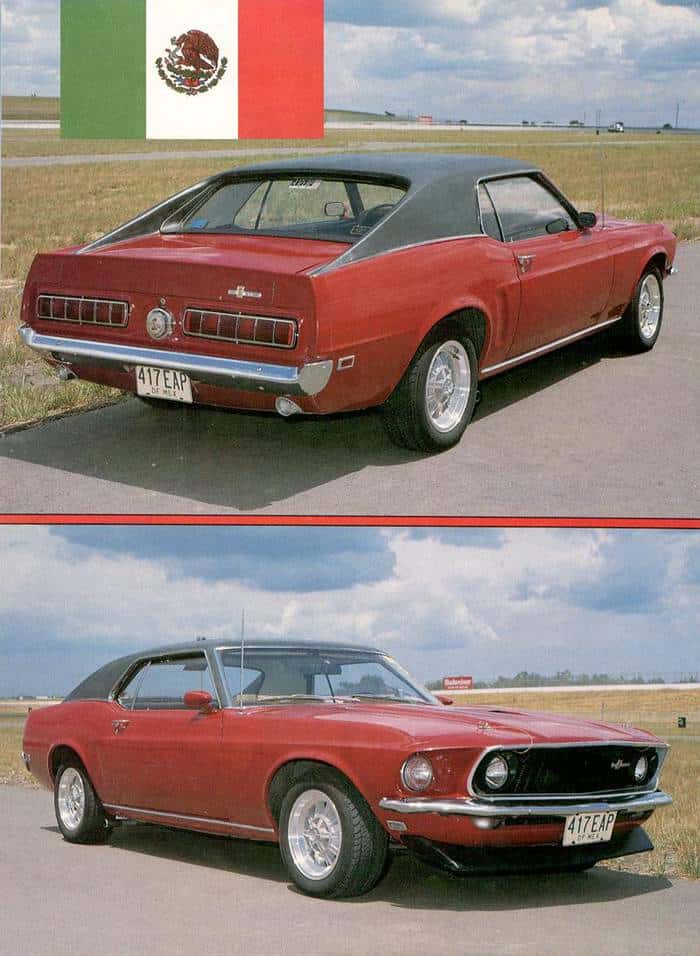 Nothing runs faster than a scared Mexican Bandito!

Reprinted from the February 1991 Issue of Mustang Illustrated

There are times when life takes an unexpected turn. Take for example MI’s recent trip to Mexico City. Last September we paid a visit to the oldest city in the Western Hemisphere with the sole intent of photographing a series of stories on the Mustangs of Mexico. As you will no doubt see by the accompanying pages, enthusiasm for the classic Mustang is enormous South of the border. It is estimated, by official Mustang de Mexico Club figures that there are over 6,000 Mustangs within Mexico City alone!

Getting back to those unexpected turns of events which I earlier spoke about. It’s Saturday morning, September 30th, and I find myself taking pictures in front of the Partido Revoloucionario Institutional (P.R.I.) headquarters in the province of Naucalpan, the largest province (county) in all of Mexico. Although I may have looked like a refugee from a “Gringo” tour bus, I was standing there for a reason. At the request of P.R.I. “Director de Publicidad” Eduardo Velazquez, I’m photographing a man many say is the next “John Kennedy” of Mexico. His name is Mario Ruiz De Chavez, and he is the “Candidate a la Presidencia Municipal,” or candidate for governor of Naucalpan. Mexican politics is considerably different than that of the U.S. These people really get worked up over their favorite candidates, and in no time at all, I find myself getting swept sway into a waiting campaign bus destined for one of the outer regions of Mexico City.

Right about now you may be asking yourself if there is any correlation between Mexican politics end classic Mustangs. The answer is yes! The “Eduardo Velazquez” previously mentioned is the very same Eduardo Velazquez who more than twenty years ago went into partnership with a tall, lanky, Texan named Carroll Shelby to produce a car called the “Shelby de Mexico,” or commonly known to us in the United States, the “Mexican Shelby!”

Eduardo Velazquez Chavez grew up in Mexico City and was the son of a “liberal” family, who at the turn of the century was deeply involved in Mexican politics. He cites his grandfather (who was involved in the Mexican revolution) and his father (who was a banker and a Mexican diplomat as being the inspirational forces in his life. Velazquez attended a German language private school as a youngster because his family felt such a background promoted good discipline. As a teenager he attended the University of Mexico and studied in Europe.

In 1960, Eduardo went to work in the law offices of one of the best known lawyers in Mexico City. After five years in practice, Velazquez became involved in the successful litigation of an extremely controversial and long running corporate dispute. With the proceeds of the sizable commission he earned, Eduardo looked around for a business enterprise of some type to invest in.

Having been a car enthusiast most of his life Eduardo focused his attentions in that direction. He ran into a couple of friends who owned a sunroof conversion company which specialized in converting Mexican Valiants for Chrysler de Mexico. Unfortunately, the projected 500 units destined for conversion fell way too short due to poor sales, and the company found themselves financially taxed and sitting on a huge inventory. In 1964, Eduardo purchased half interest, hung up his business suit and proceeded to turn things around.

After a year of working night and day, Velazquez and his partners decided they needed other lines to increase sales. At the time the Volkswagen “Bug” was (and still is) the most popular car in Mexico. Velazquez contacted Californian Joe Vittone, owner of European Motor Products Incorporated (EMPI), and arranged for the exclusive distributorship of EMPI parts in all of Mexico. Simultaneously, the company also approached another big name in the automotive aftermarket, Shelby American.

The company started selling Cobra parts in 1965. Velazquez initially dealt with Timothy H. Foraker, the Parts Manager of Shelby American at the Time. Since the Mustang had just been introduced in the States the year before and it was then being assembled in Mexico City, Cobra High Performance parts sales went well. Eduardo decided to become more involved with the Cobra end of the business, and purchased a red 1965 Mustang GT coupe with the intention of using it for racing and sales promotion. This first car, driven by Juan Emilio Proal, won the Mexican Toluca Road Races in 1966. He sent the car up to Lew Spencer’s High Performance Motors in Los Angeles where the car was equipped with practically every part Shelby produced. Simultaneously, Velazquez also applied for the exclusive distributorship of Cobra parts in all of Mexico.

Timothy Foraker arranged for a meeting with Carroll Shelby, and it’s a meeting Eduardo remembers very well. “When I was shown into Carroll’s office I was taken aback by the earthiness, simplicity and the intelligence of Shelby. We became friends immediately and we had a long conversation. He was interested in knowing the way we distributed to the Ford dealers in Mexico our terms, shipping policies, the most accepted products, and even how we approached the parts managers, to convince them of the value of our products. Carroll gave me a lot advice to that end, and invited me to dinner to his house that evening” (Velazquez would later relate that they would load up the company’s VW Micro-Bus with Cobra parts, and drive all around Mexico selling to Ford Dealers directly out of the back of the bus. Ed.)

Since the notchback body style could not use the same fiberglass body parts installed on their American cousins, and the import of fiberglass body parts like hoods, deck lids, and quarter panel extensions was not allowed into Mexico, Shelby de Mexico had to manufacture its own body parts. Interestingly, the 169 cars built in 1967, and the 203 units built in 1968 resembled “California Specials” in appearance.

By 1969, Shelby de Mexico had enough racing experience to build a faster and lighter race car. One of the first 1969 Mustang coupes to roll off the Mexico City assembly line became the donor car. Virtually every unnecessary part was taken out of the car. The entire front end, hood, doors, rear quarter panels, and deck lid was made of lightweight fiberglass. The roll bar was designed as an integral link between front and rear subframe. The rear of the roll bar actually extended past the rear of the roofline resulting in the creation of the production Shelby de Mexicos distinctive rear roof extensions. The brakes had a special cooling duct, and the entire engine compartment was ducted to allow cool air to enter, and hot air to escape.

Powering this “Libre” class racer was a very special 377 cubic-inch engine which was acquired with special assistance from Carroll himself. On the outside, the block looked like any other 302 engine, but the block was considerably stronger and lighter. (Velazquez still has this engine in his collection, Ed.) Equipped with a set of aluminum Gurney-Westlake heads with Weber carburetors. Useable horsepower was around 450!

With Juan Emilio “Oso” Proal driving, and Chief mechanic and engineer Alfredo “The Wizard” Tame Badia, (Tame has since gone on to field one of the most successful Nissan-sponsored sedans, and Marlboro-sponsored, F-2 teams in all of Mexico. Ed.) This car won the Mexico City Grand Prix, the Mexico City-Cuernavaca Race, the Valle de Bravo-Bosencheve Road Race, the Leon Guanajuato Race, the Guadalajara races and first place at the Acapulco Road Race. This car was perhaps the best Shelby de Mexico racer ever constructed.

Eduardo Velazquez and his racing associates always practiced “good politics” everywhere they raced. The name of the local Shelby de Mexico dealer in whatever particular province they happened to be competing was always painted on the rear roof pillar of the race car. It helped sell a lot of cars!

The year 1969 proved to be Shelby de Mexico’s best production year ever. The new 1969 body with its rear roof extensions, vinyl top, sequential taillights and distinctive Mach-1 styling was quite a seller. In total 306 of these cars were produced, which is probably why the only surviving Mexican Shelby’s located so far (all 11 of them!) have been 1969s.

The end for Shelby International S.A. came in 1974. In between came a few miniscule efforts like the 1972 Shelby de Mexico “GT-351;” which actually had very little to do with anything Shelby at all. The company kept selling the once extensive inventory of Shelby and Cobra high performance parts until the inventory was depleted. They also briefly specialized in converting 1971-73 Mustang coupes into fastbacks as well.

Today at age 50, Eduardo Velazquez operates the largest drywall building material company in Mexico called Grabber Mexicana. His success in business has also allowed him to pursue not only politics but his love of cars. Velazquez is currently restoring his infamous 1969 “Libre” road racer, complete with 450 horsepower Gurney-Westlake engine, and plans on campaigning it in vintage competition next year.

Eduardo has also become a sought after guest speaker on the Shelby club circuit, and has been extremely active in locating Shelby de Mexico’s for interested American buyers. So in a sense, he is helping to perpetuate the legend he started. That in itself gives Eduardo Velazquez a tremendous amount of satisfaction! As they say, “There is nothing that runs faster than a scared Mexican Bandito” even if he is now twenty-one years older! MI