The weekend was marred by tragedy, when driver Bob Akin sustained fatal injuries during Thursday practice. Akin was testing a 1988 Nissan GTP ZX-Turbo and apparently made contact near Turn 4 with another GTP car driven by a fellow ex-professional. His GTP car went off course, impacted a wall on the left, became airborne and came to rest approximately 180 feet from the point of initial contact. Akin was taken to Grady Memorial Hospital in Atlanta, where he died Monday night. 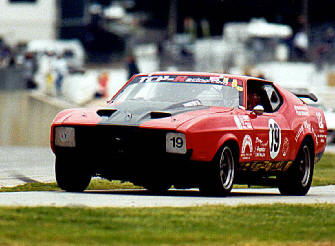 The Rolex endurance race, part of the Historic Sportscar Racing’s (HSR) 25th annual Walter Mitty Challenge, had over 50 competitors on the track, making for nearly constant traffic in every turn.

Gluck, starting from 47th on the grid after having mechanical problems during the qualifying race, passed seven cars before the first turn on the initial lap. He was running in the top 20 and moving higher about halfway through the race when officials black-flagged the Mustang because it was smoking.

The smoke was caused by a loose valve cover bolt that was dropping oil onto an exhaust header, requiring an eight minute pit stop to fix. Back out on the track after the extra-long stop, an accident put the race into a full-course yellow for 10 laps. When the green flag came out, Gluck quickly moved back through the pack into the top 15, before being black-flagged again due to leftover oil still smoking on the header.

The Team Dark Horse crew washed the oil off, but by the time Gluck was back on the track to take the checkered flag, the Mach 1 was down in 39th place overall, third in Class G2. John Cloud’s 1967 Camaro was first in the class and second overall in the race, while the 1965 Corvette of Charles Koninsky of Marietta, Ga., was second in class and 20th overall.

Augusta, Ga.’s Bryan Weeks had the fastest Mustang in the race. His 1965 model was fifth overall with a best lap of 1:41.

The weekend ended abruptly for Gluck during the WorldCom Dash race later Saturday afternoon. On the third lap of the eight lap event, he was powering out of turn 7 when the driveshaft came apart.

“This was like having thunder go off inside your car,” Gluck said. “It was the loudest explosion I’d ever heard in a car. The back of the car probably jumped a foot and a half off the ground.”

The snapped shaft made a four-inch high dent in the passenger-side floorpan, flattened one of the mufflers, ruptured brake lines, and damaged the transmission mounts.

Next up for Team Dark Horse
() is an American Iron
series event at Charlotte and the HSR Mustang Reunion
at Virginia International Raceway, both in July.