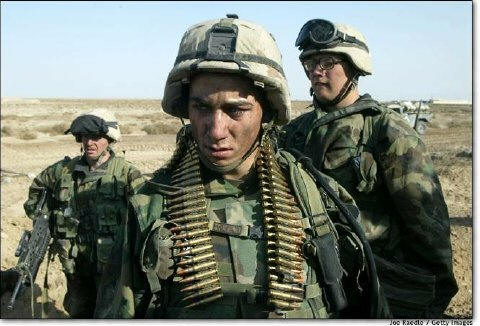 He’s  a recent High School graduate; he was probably an average student,
pursued  some form of sport activities, drives a ten year old jalopy, and has
a  steady girlfriend that either broke up with him when he left, or swears to
be waiting when he returns from half a world away. He listens to rock and
roll or hip-hop or rap or jazz or swing and 155mm howizzitor. He is 10 or
15 pounds lighter now than when he was at home because he is working
or fighting from before dawn to well after dusk.

He has trouble spelling, thus letter writing is a pain for him, but he can field
strip a  rifle in 30 seconds and reassemble it in less time in the dark. He can
recite to you the nomenclature of a machine gun or grenade launcher and
use either one effectively if he must. He digs foxholes and latrines and  can
apply first aid like a professional. He can march until he is told to  stop or
stop until he is told to march. 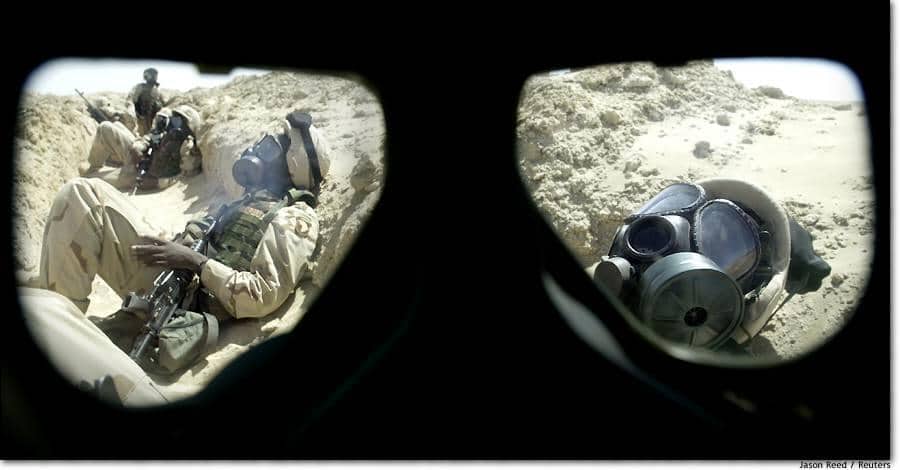 He obeys orders instantly and without  hesitation, but he is not without
spirit or individual dignity. He is  self-sufficient. He has two sets of
fatigues: he washes one and wears the  other. He keeps his canteens
full and his feet dry. He sometimes forgets  to brush his teeth, but
never to clean his rifle. He can cook his own  meals, mend his own
clothes, and fix his own hurts. If you’re thirsty,  he’ll share his water
with you; if you are hungry, his food. He’ll even  split his ammunition
with you in the midst of battle when you run low.

He has learned to use his hands like weapons and weapons like
they were his hands. He can save your life – or take it, because that
is his  job. He will often do twice the work of a civilian, draw half the
pay and  still find ironic humor in it all. He has seen more suffering
and death  then he should have in his short lifetime. 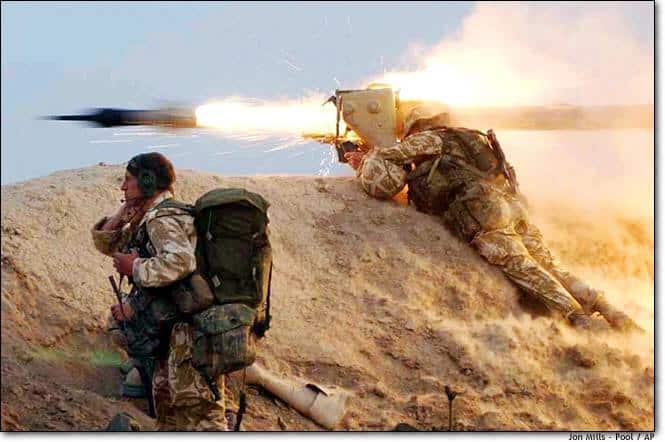 He has stood atop mountains of dead bodies, and  helped to create them.
He has wept in public and in private, for friends  who have fallen in combat
and is unashamed. He feels every note of the  National Anthem vibrate
through his body while at rigid attention, while  tempering the burning
desire to ‘square-away’ those around him who haven’t  bothered to stand,
remove their hat, or even stop talking. In an odd  twist, day in and day out,
far from home, he defends their right to be  disrespectful.

Just as did his Father, Grandfather, and  Great-grandfather, he is paying
the price for our freedom. Beardless or  not, he is not a boy. He is the
American Fighting Man that has kept this  country free for over 200 years. 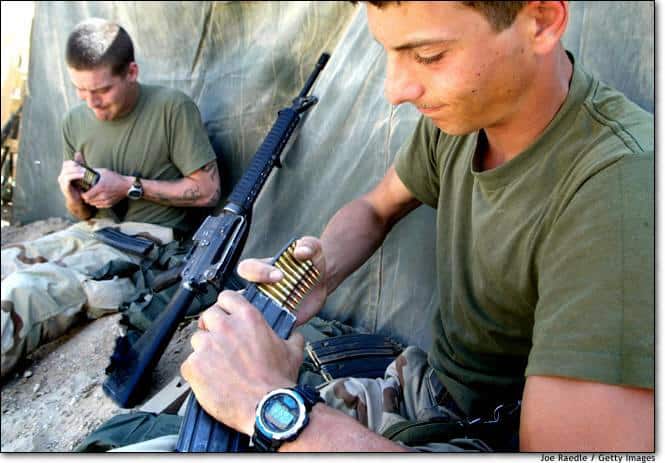 He has asked nothing in return, except our friendship and  understanding.
Remember him, always, for he has earned our respect and  admiration
with his blood. And   we have women over there in danger,
doing their part in this  tradition of going to War when  our nation calls
us to do so. As you go to bed tonight, remember this  shot.. A short lull,
a little shade and a picture of loved ones in their  helmets…….

“Lord, hold our  troops in your loving hands. Protect them as they protect us.
Bless them  and their families for the selfless acts they perform for us in our  time of  need. Amen.”

Prayer : When you read this, please stop for a moment  and say a prayer
for our ground troops in Afghanistan, sailors on ships, and airmen in  the air,
and for those in Iraq.   This can be very powerful…….
Of all the gifts you could give a US  Soldier, Sailor, Coastguardsman, Marine
or Airman, prayer is the very best  one.